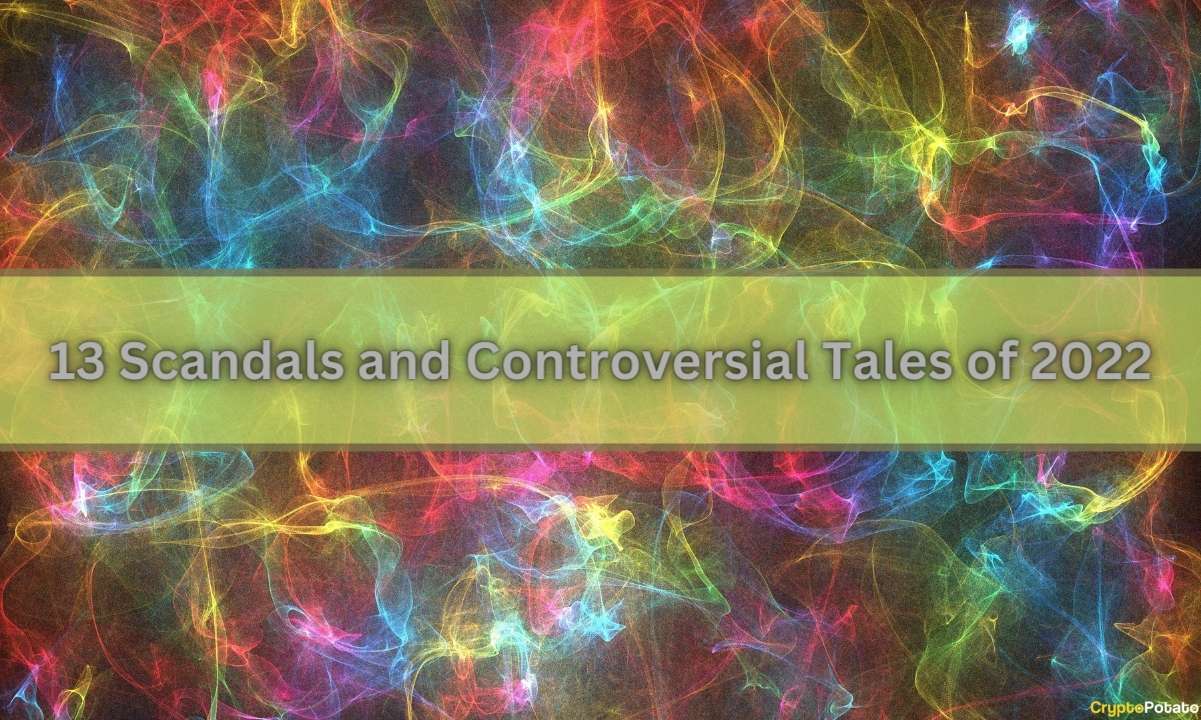 The crypto market behaving erratically is nothing new, but absolutely no one saw such epic levels of fund mismanagement coming from established giants. The young industry’s turn to a more sordid state of affairs hit everyone by surprise, especially after the heady rush of the bull run last year.

2022 was marred by corruption and fraudulent activity. An industry that claims to have traceable and public transactions saw big bucks being funneled maliciously with much audacity and uniqueness. NFTs were being stolen, but no one knew what to do. Rug pulls wreaked havoc in DeFi space. Trillions have been wiped from the markets so far.

All that remains now are the tales of incompetence and arrogance of some of the fallen bigwigs that serve important lessons for those watching closely. Let’s look at the year that was.

The True Face of Sam Bankman-Fried

FTX’s collapse weighs heaviest on the market marking the fall of the golden boy of the industry. Sam Bankman-Fried resigned as CEO of FTX as the company filed for Chapter 11 bankruptcy in November. He is now being touted as the new Bernie Madoff.

His media tour comments that chimed something along the lines of – “I’m an idiot, not a crook” – did not sit well with the community. The former FTX exec was slapped with a litany of charges and accused of ripping off nearly one million people.

Bankman-Fried and his once closely-knit circle of friends/colleagues were accused of committing international fraud in billions of dollars and sinking millions into political candidates in just three years. From the wild DM exchange between him and a reporter to post-scandal interviews, it has been a train wreck for the 30-year-old dethroned billionaire.

It all came crashing down for SBF as his exchange faced a massive liquidity crunch in a storm of withdrawals and a complete failure to honor the redemption requests. A quick thread on some of the most shocking findings that liquidators brought to light can be found here:

While the collapse of @FTX_Official is now common knowledge, did you know that the root user to access private keys and critically sensitive data was accessed through an unsecured group email?

The bankruptcy filing made several shocking claims, here are some of them. 🧵👇👇 pic.twitter.com/mOcxCGPTpQ

What exactly happened with Terra ecosystem’s algorithmic stablecoin, UST, is still a mystery. But regulators and Do Kwon critics have been quick to dismiss it as a case of market manipulation.

Its once arrogant CEO humbling came only after the ecosystem descended to a disastrous fall from grace. The subsequent crypto crash wiped out an estimated $60 billion, shaking the entire global digital currency market.

In any case, the collapse of the entire ecosystem led to increased scrutiny of stablecoins, in general. Following the meltdown, global regulators started proposing various ways to regular stablecoins better in an attempt to prevent similar incidents from occurring in the future.

Nevertheless, the contagion spread throughout the market like wildfire, which leads us to the next point.

What was one of the industry’s largest hedge funds turned out to be a firm operating with particularly lenient risk management, having been overexposed on multiple fronts.

The trading firm, spearheaded by community powerhouses Kyle Davis and Zhu Su, was ordered into liquidation by a British Virgin Islands court in June. Citing sources familiar with the matter, Sky News reported that the “liquidation would be a significant moment in the current unraveling of the cryptocurrency sector, which has grown at breakneck speed in recent years.”

This, in itself, had an impact on the industry as a lot of cryptocurrency businesses had funds managed by 3AC. But it didn’t stop there.

Several CEOs exited this year as the bear market took hold. Alex Mashinsky too, resigned as the head of the bankrupt crypto lender Celsius in September.

But his shady moves continued to make noise. A report of Mashinsky and top company executives cashing out just before the platform halted user withdrawals emerged.

It turned out that someone like Mashinsky, who simply parrots simpleminded slogans such as “banks are not your friends,” ended up building a conventional bank, hoping to churn in gains from crypto trading and speculation.

His hubris showed no end, yet as the saying goes, if it sounds too good to be true, it probably is. Celsius, as reported, filed for Chapter 11 bankruptcy protection after acknowledging a $1.2 billion hole in its balance sheet. A separate lawsuit now accuses Celsius of “operating a “Ponzi scheme.”

The Undoing of Axie Infinity

According to reports, the scammers targeted employees of Sky Mavis and reached out over LinkedIn on behalf of a fictitious company. One senior engineer took the bait and proceeded with multiple rounds of the interview that had an “extremely generous” fake compensation package. Upon clicking a PDF supposedly containing the official offer, the hackers were able to compromise the engineer’s computer.

At its peak, Axie Infinity was huge, boasting 2.7 million daily active users and over 200 million in weekly trading volume for its in-game NFTs in November last year.

A Highly Profitable Trading Strategy… or Not?

While maintaining that his actions were legal, Eisenberg said that the trading strategy he applied was a “highly profitable” one which was made possible because the developers of the DeFi trading platform “did not fully anticipate all the consequences of setting parameters the way they are.”

The regulators feel differently. The self-described game theorist was charged with commodities fraud and market manipulation by US prosecutors and was arrested in Puerto Rico on December 26th.

NFT marketplace Superrare’s senior community manager Ashni Christensen and Ethereum Name Service (ENS) director of operations Brantly Millegan came under sharp scrutiny in February over past tweets. The usage of racist language and tweets about transphobic abuse caused a stir in the community, with a wide majority calling for the execs’ removal.

This was the time when “woke” culture clashed head-on with certain beliefs in the crypto industry that vouches for inclusivity.

Blockchain sleuth, ZachXBT later uncovered that the theft of the actor’s NFTs was part of a sophisticated multimillion-dollar scam operation that has roped in numerous victims.

Always seen as an enemy by law enforcement agencies, Tornado Cash was believed to be heavily relied on by North Korean state hackers who were behind the $625 million heist from the Ronin Bridge as well as $100 million from the Horizon Bridge. Shortly thereafter, a 29-year-old developer of Tornado Cash was arrested by Dutch Crime Agency (FIOD).

The crypto industry responded with outrage and lawsuits.

Law firm Roche Freedman is notorious for bringing class action suits against some of the most popular crypto firms. Stablecoin issuer Tether and sister exchange Bitfinex, the Tron Foundation, and BitMEX are a few of them.

However, things turned embarrassing for partner Kyle Roche in August when he was caught on video calling jurors “10 idiots” and boasting that he “sues half the companies in the industry.”

What followed was a complete mockery of himself and some astonishing claims about industry insiders. Roche claimed that his law firm had a “secret pact” with Avalanche blockchain developer Ava Labs to go after its rivals in exchange for “a massive quantity” of stock and millions of dollars worth of AVAX tokens.

The judge called him “uniquely stupid.”

Endorsing Securities Became a Costly Affair for This Kardashian

Celebrity influencer Kim Kardashian was fined with $1.26 million settlement with the SEC over her endorsement of EthereumMax (EMAX).

Kardashian had promoted the obscure token to her 225 million followers on Instagram without disclosing that the post was an ad. She was paid $250,000 for the same.

The Tesla chief has only been in charge of Twitter since late October, but a lot of things have changed in the social media platform.

From booting top execs, slashing rank-and-file headcount by 50%, to bombarding its remaining employees with an ultimatum with regards to their work ethic and instating a number of new features such as including charging users to get or keep a verification check mark, the Blue Bird has been turned upside down.

You can check the full series of events that led to the acquisition in our thread here:

🧵 Here’s the complete breakdown of how the entire deal went down: pic.twitter.com/ZcZdplcleL

No one loves a rags-to-riches story more than BBC and almost ran a “puff piece” on a crypto scammer. Hanad Hassan is a 20-year-old refugee who said that he “wants to use his wealth to help people” and claimed that the crypto project he founded deployed $270,000 on good causes. He was reportedly the founder of Orfano X in 2021.

But it wasn’t until this year that BBC took note of him. The broadcaster prepared an almost 30-minute documentary on a crypto scammer titled “We Are England: Birmingham’s Self-Made Crypto-Millionaire.” Social media did what it does best. Users across Twitter accused the founder of stealing users’ funds after creating a scam project.

BBC then launched an internal investigation after quietly taking down the article. The scheduled airing was also pulled hours before it was supposed to go live in February. BBC is now facing questions over how much due diligence it actually conducted on the project and into the scammer’s work.

There’re surely more stories that fit the criteria of a scandal, and we might have forgotten some in what seemed an endless list.

For what is worth, let’s at least hope that 2023 will provide more tales of pride than of sordid.